These suspending lures combine a revolutionary bait fish profile and wounded minnow action to entice trophy Trout, Redfish, Snook, Tarpon, Striper and more. Realistic 3-D eyes, “fish calling” sonic rattle, and the famous MirrOlure® flash make the Catch 2000® and Catch Jr.® irresistible. These lures have been scientifically weighted for neutral buoyancy, allowing fishermen to fish the shallows without hanging the bottom. With a twitching retrieve, they come “alive” in the water, darting from side-to-side, resulting in monstrous strikes. The Catch 2000® and Catch Jr.® remain in the strike zone longer than other baits. Try fishing them very slowly. This will often tempt or aggravate “non-feeding” fish. 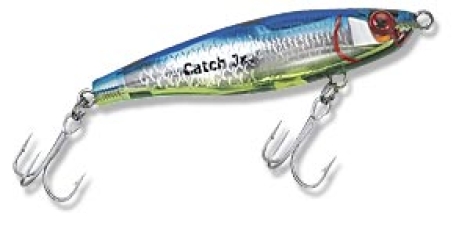 Glow in the dark lime green